“Read it. It Could Save Your Life” 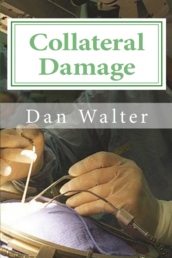 “Author Dan Walter offers a unique education from the patient family perspective about the damage that corporate greed does to healthcare in general, and the doctor-patient relationship in particular.”

” …Five Stars! This book is an on-target indictment of dangerous, unethical, and money-driven factions within our health care industry. Many ill patients receive quality care in America, but far too many are also victims of the dark heart that poisons American healthcare. Read it. It could save your life.”

Collateral Damage: A Patient, a New Procedure and the Learning Curve

“A Mitral Valve,  Flapping in the Breeze, Prolapsed into the Atrium …”

JOHNS  HOPKINS MEDICINE has a long tradition of prioritizing patients, and striving for the bottom rung are the anonymous poor. If, for example, you catch a bullet on a Baltimore street corner, or your mother presents you at the ER as a feverish welfare child, then it’s open season for the med students, well meaning as they may be. They can practice on you because if  their actions result in an adverse outcome—which is to say that if you are mangled or killed—nobody will question said outcome, precisely because… you are a nobody.

At the other end of the spectrum are wealthy and prominent patients, who get treated by doctors who have already learned what not to do from the mistakes inflicted upon the lower classes.

My wife landed somewhere in the middle. We got snookered by all the hype from US News into thinking that she was going to be treated by the best doctor at “The Best Hospital in America.”

Hugh Calkins, MD was to maneuver tiny wires around in my wife’s heart and burn scar tissue in the wall of the atrium to stop atrial fibrillation.

The job required someone with a cool head and a keen eye, and Hugh Grosvenor Calkins, MD, FACC, FAHA, FHRS, Professor of Medicine, Director of the Electrophysiology Lab at Johns Hopkins University School of Medicine—and graduate of Harvard Medical School—assured us that he had done plenty of these procedures, and, he said, “experience counts.”  So we knew we were in the best of hands. What we didn’t know is that Professor Calkins—according to what he later told colleagues—follows the practice at most teaching hospitals wherein “the attending shows up to be there during the burn.”

What he meant by that was this:

The patient is etherised upon a table and wheeled into the lab. A student of the  treatment  performs routine aspects of the procedure.  According to the rules, all this is to be done under close supervision. Under bright white light, the rookie’s blue latex fingertips feel their way up the smooth soft skin of the  exposed groin,  goose bumps because  it’s cold in the room, pressing and probing and picking a spot, the point of a large bore needle pressing into the skin until it punctures and there is blood.

The trainee then inserts the sheath for the catheter into the vein and snakes it up into the pumping heart.  The catheter wire is then fed into the sheath. This is the point at which you would expect the experienced attending physician to step in because it is a very tricky business to navigate a thin wire around in a beating heart guided by cloudy X-Ray imagery, even if you know what you’re doing.

But since he only “shows up to be there during the burn,” Hugh Calkins was presumably relaxing with colleagues down in the doctor’s lounge or out selling TASER guns while a young cardiology trainee by the name of Richard Wu—whom we’d never

met—was sweating out a decision in the lab. He had a stranger laid out before him and a new type of catheter in his hand.

It appears that young Wu wasn’t sure about which chamber of Pam’s heart to insert the catheter. He went for the left ventricle (it says right on the box to not do that). The catheter tip got tangled in the web of muscles that operate the heart’s mitral valve.  Her chart read: “only the first 50% of the circular portion of the catheter tip could be withdrawn into the sheath and pulsatile motion could be appreciated.”

They were pulling on the catheter, trying to cajole it off the snag, but it was tugging right back, like they’d hooked a five pound bass. A nurse noted here that the “patient is waking and moving around, with chest pain @ 7/10.”

111 Responses to “Read it. It Could Save Your Life”